Even though we are discussing the hind legs last, they are of singular importance. Along with the pelvis, they decide how a horse is ‘geared’; high revs with a short stroke for sprinting, or lower revs with a longer stroke for dressage – and everything in between.

The LS joint is the upper most joint of the haunch, not the hip joint, and covers only about six inches of surface area. It joins the horse’s entire hindquarter to its ribcage (and thusly to its front). Think about that for a moment, the entire haunch is attached to the rest of the horse by an area the size of your hand. It’s why the loin and sacrum are often the first areas of stress and injury in the horse.

It’s important to understand how the whole haunch works as one. Tendons and muscles that run parallel with the horse’s bones create a ‘stay system’ that coordinates the opening and closing of the joints:

There is no way around the stay system without causing damage to the horse. It should now become apparent why such traits as table top croup (overly flat pelvis), post-leggedness (overly straight hind leg causing open joints) and over-angulation (overly crooked hind leg causing closed joints) are serious faults in the horse.

We can see that the flat croup of this horse causes the femur to be positioned quite vertical (indeed, in a vertical position associated with a racehorse in full extension – see diagram), in turn creating a very open stifle angle of approximately 143 degrees. Imagine the amount of loin coiling that would need to happen for this horse to lower the haunch for collection.  The fact is the LS joint doesn’t have that kind of range of motion. Conversely, imagine what happens if this horse flattens its loin just a little, how that will put the femur completely vertical and further open an already open stifle joint, stressing it.  This horse is functionally post-legged in the upper half of his leg and it would not be a surprise if he suffered from sticking stifles. 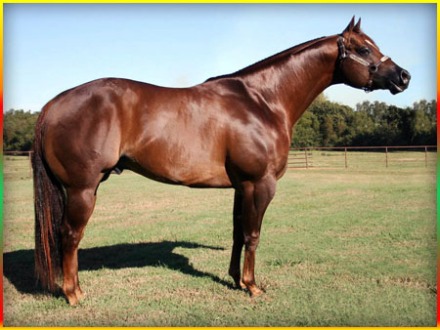 Our post-legged horse has a much steeper pelvis and it’s a good thing as it puts his femur far less vertical than our first horse making a stifle angle of 130 degrees. If he had a more typical pelvic slope he’d be overly open in this joint, but as it stands he’s already got enough problems. His hock angle is a whopping 160 degrees. Note the racehorse below in full hind leg extension (via fully flattened loin and fully opened stifle) only has a fully opened hock angle of 160 degrees. The horse’s hock doesn’t, and isn’t supposed to open to create a perfectly straight leg. That means that if this horse flattens its loin just a little, which has to happen as part of normal striding, his hock will be pressured to hyperextend.  The horse will try and protect himself by taking itty, bitty steps behind. 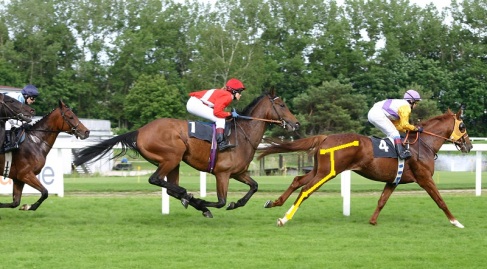 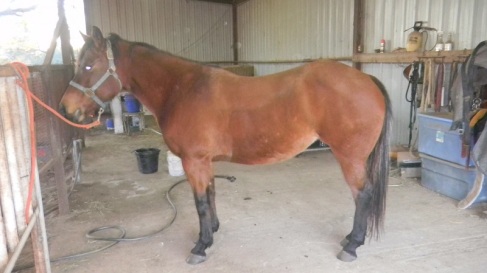 This horse has a steeper pelvis as well, but also the most horizontal femur because she’s standing with the leg too far underneath herself artifically closing the thigh joint. Of course, because of the stay system that also artificially closes the stifle and hock joints. Despite that we can still clearly see that over-angulated hind legs possess more closed joints; 115 degrees for the stifle and 140 degrees for the hock – adjusted 5 degrees higher for a properly aligned stance behind nets 120 and 145 respectively. Horses built like this live with joints perpetuately a bit closed, which comes with its own stresses (and possible injuries – ie. curbs). Opening the joints would relieve those stresses, but because of the stay system the horse would have to flatten its loin along with the opening of those joints, and now you’ve got a hollow horse with trailing hocks.

For comparison sake, below are a hind limb suited to dressage and a hind limb suited to racing.  Pelvic slopes are very similar, and though the dressage leg is more angulated, and the racing leg straighter, we’re not talking gobs of difference between a horse that can piaffe in her sleep and a racehorse who thunders down the track in excess of 35mph.

I included a second racehorse hind limb to look at, Secretariat.  He had a steeper pelvis (about 5 degrees) than the dressage horse, but note again that the angles created are not hugely different.  This should make it obvious to all, that extremes like the examples above are bad for horses and should not be perpetuated. 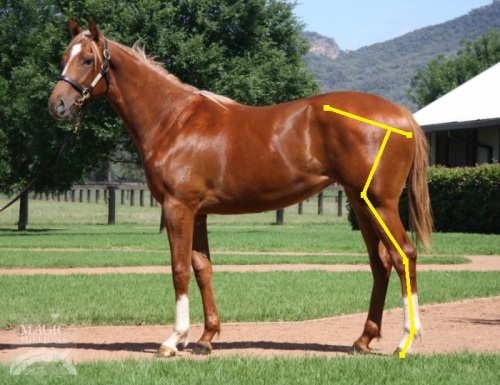 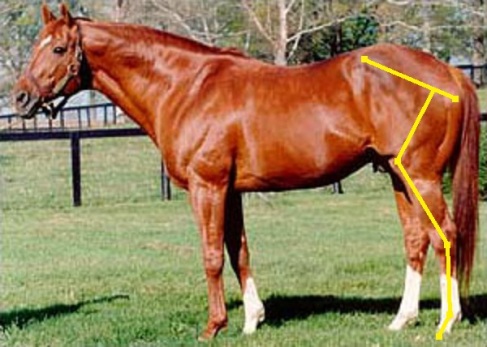 jrga made an excellent suggestion that I also mark the hind leg of the second racehorse in the racing picture to show maximum folding (closed joints) of a properly constructed equine leg as a comparison to the fully extended (open joints) of a properly constructed equine leg.  So here is that picture remarked.  Of special note is that the pelvis and tibia become parallel, and the femur and cannon bone become parallel as a result of full and proper coiling of the LS joint.  It can not happen this way for horses with non-concurrent hind limb angles, or a table top croup.