Predicting how a growing baby will finish is tough.  Though we know the general rate at which the horse’s bones grow (see pages 7&8: Equine Studies – Ranger Article by Dr. Deb Bennett ) and we even know that foals are born with approximately 80% lower limb length, that still isn’t enough information to correctly predict final bone lengths and ratios, or joint angles; all of which can play significant roles in athletic potential for specific disciplines.

*Take the time to read the entire Dr. Deb Bennett article I linked.  It has invaluable information in it.

Here are some things we do know with certainty:

There are other things, but that’s enough to get us started.  Let’s examine a few youngsters and see what we can see.

Right off the bat we notice the huge hip on this baby, but that’s not surprising to see as it’s a trait we’ve come to expect to see in QH’s.  Already he shows the big muscle masses he’ll carry as an adult.  He’s compact front to back with a deep and super short loin (last rib is practically on top of his point of hip).  While this doesn’t mean he’ll end up with those features as an adult, it does increase the odds that he won’t end up long through the back and/or loin.  To know for sure, we’d have to look to his parents, grandparents and siblings.  His LS joint is solidly placed.  He also has a gorgeous neck, set deeply and higher than is often seen in QH’s; none of that will change as he grows.  He also has a beautiful large, almond shaped eye.  Currently he’s downhill and there’s no way to know if he’ll level out or finish downhill (though, a large percentage of QH’s are downhill built), other then again examining his parents, grandparents and siblings.  We should note here that currently his upper hind leg bones are ahead of growth compared to his upper forelimb legs. (Elbow and stifle are very close in height.)  This happens in a lot of individuals to various degrees, often associated with breed.  (Meaning, there are breeds that tend to grow more evenly than others.)

So far there’s a lot to like about this youngster.  I do question that shoulder angle, though.  It looks like it’s closed (85 degrees with the horse currently standing with the joint artificially more open than it truly is with that front leg stance), which is typical of a lot of QH’s.  This results in limited stride length of the foreleg. 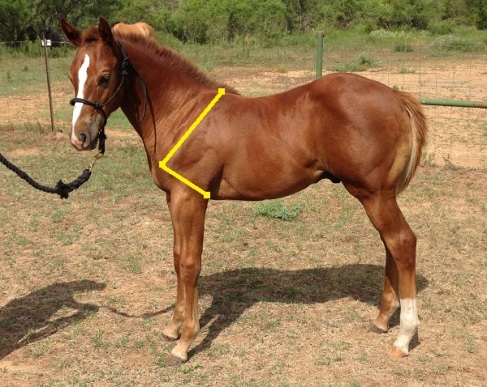 Right off we notice this youngster’s long neck.  It’ll finish long (and that’s a fault), but it is set on well.   It’s hard to tell from this angle, but it doesn’t appear his LS joint is as well-placed.  Certainly there is more general loin length and less depth than the QH suggesting this youngster might finish a bit weak behind in structure.  The overall longer, lankier look of this colt is partly due to breed and partly due to growth phase.  He doesn’t carry nearly as much hip as our QH, but then we wouldn’t expect him to.

Notice this baby is pretty close to level built.  Arabians are one of those breeds where individuals tend to grow more evenly and certainly most end up level or close to level in build.  We can assume that for this one as well.

The front limbs look straighter, whereas our QH baby looks to toe out.  This is a non-concern for our QH.  Wide chested horses will often toe out as babies, and you want them to because as the chest widens the forelimb will rotate in its socket and straighten.  Arabians are much narrower bodied individuals, so you don’t want to see them toeing out noticeably as babies.

This one has a better shoulder angle, even though, he too is standing with it a touch artificially open.  He possesses nice length to his vertical humerus bone (an excellent trait) and has a loose elbow.  This youngster will finish with much more expression in his front leg gait and a longer, looser stride through the entire length of his limb than the QH.

The picture cuts off his right front foot a bit (and I can’t see the left at all), but this youngster seems to be carrying more heel than is normal.  It might be a farrier issue, or it might be this one has a club foot.

Very leggy, big hip, laid back shoulder, long humerus, short forearm and deeply set neck are the features that stick out at quick glance.  Forelimbs toe out a lot and that’s not just from an awkward stance.

Looks like a different horse already, eh?  That deeply set neck looks ultra-short (but we don’t worry about that, yet, since the neck is one of the last things to stop growing) and the hip appears to have lost its size.  The other difference to note is that the loin suddenly got long.  At this early stage of growth, that’s a bad sign and likely foretells of a long loin in adulthood.  The forearm still looks shortish, but the humerus is long.  Look at the right front…there’s a hint of the toe out. 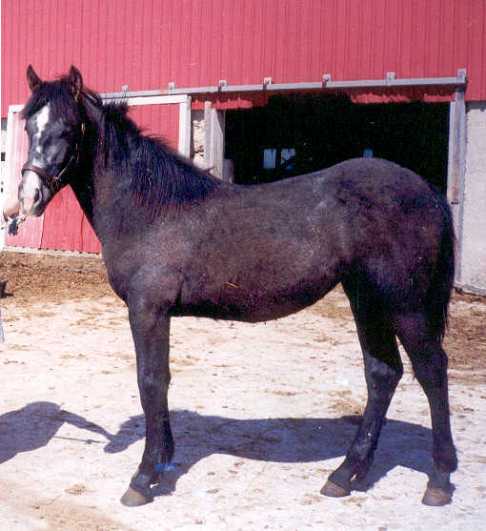 Phew!  The neck lengthened and the hip grew, but that loin still looks too long for this early on.   We’ve also hit a phase of butt highness and this has stressed the horse’s posture.    That forearm still appears short.  Look at the front limb stance, toed out. 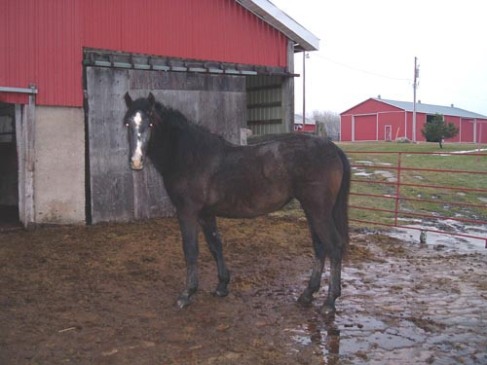 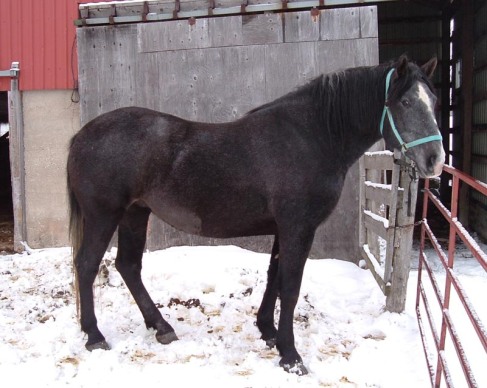 The hip shows plenty of length, but the loin is long.  Much less toe out in front. 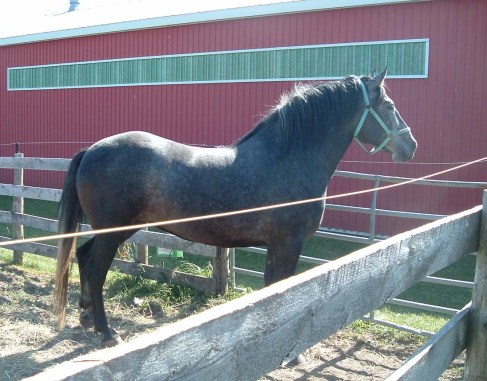 As an adult with the same deeply set neck, set high on a laidback shoulder, and a good sized hip.  The loin finished long, the humerus has good length, and though the fence cuts off the rest of the front legs, the forearm is shorter than ideal.  The horse no longer toes out. 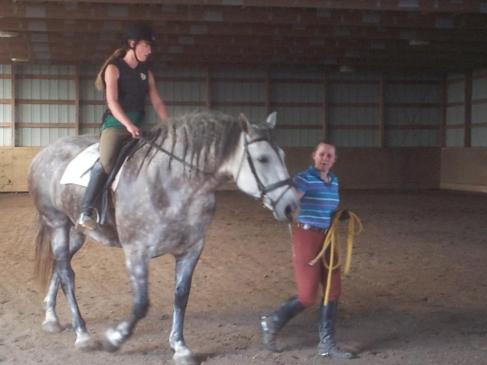 This picture shows the massive width in the chest and why as a youngster this horse toed out so much.

The best indicators for baby growth will always be examining the parents, grandparents and siblings.  An individual will be a combination of traits of its parents and to a lesser degree its grandparents (and negligibly great-grandparents), where recessive genes and traits that ‘skip a generation’ can come from.  There’s absolutely no use pulling out a picture of some distant relative and thinking that’s what you’re going to get, unless the sire or dam look like that.