I’ve mentioned multiple times that what a horse does with its body to be fast is very different than what the horse does to collect under a rider. That means that there are significant physical differences between the two, but there are also several, very important similarities such as good hip length, well-placed LS joint, big, clean joints and straight legs.

The differences mean that not all racing bred Thoroughbreds are well-suited to carrying riders in secondary disciplines. Indeed, I’ll go on record as saying the vast majority are not well-suited, particularly for the average owner. Yet the breed is plentiful and certainly there have been many who’ve gone on to be successful in a second career. This article will discuss the major (different) traits that make (or break) an easy transition from racehorse to riding mount.

In no particular order:

Levelness Of Build – A large percentage of racing bred TB’s are downhill built. Already this is a disadvantage in riding disciplines putting more weight on the forehand and making engagement more difficult in direct relation; the more downhill, the more of a disadvantage. Remember to look at the spine, not at the withers and croup. (See blog article:  The Up And Down Of It – Levelness Of Build) A horse doesn’t have to be downhill built to be successful on the racetrack, so look for one that is close to level built.

Neck Set – There is also a large percentage of racing bred TB’s that have low set or ewe necks. Again, this is not a requirement for a racehorse but neither is it detrimental to producing speed so it’s been allowed to perpetuate in the breed. It is, however, a fault in a riding horse making engagement significantly more difficult. Necks set on low posturally (it’s a word now) want to drop at the base (lower cervical curve deepens), this in turn lifts the head, drops the withers, hollows the back and pushes the hocks into a trailing position. (See blog article: What Is The Optimal Neck Position?)

Hind Limb Angulation – A racehorse will carry a straighter (relative) hind leg, one with less angulation. That in and of itself isn’t going to prevent the horse from being a good riding mount, but if the leg is too straight (post-legged) then there’s going to be issues.

Hind Limb Bone Ratios – The most significant ratio is femur length to tibia length. Many racehorses will possess a tibia longer than a femur. This is contrary to what we want in a riding horse, where we like the femur to be at least as long as the tibia, but hopefully longer. A longer femur means more potential for stroke length. The racehorse takes shorter, quicker, thrustier (relative) strides, whereas we want the riding horse to take longer, slower, carrying strides.

Hock And Stifle Set – Many racehorses with have high hock and stifle sets. This tends to go hand-in-hand with a downhill build, shorter femur and longer tibia. The higher the hocks and stifles, the harder it is for the horse to ‘sit’ (lower the haunch), a requirement for engagement and collection.

Feet – Racing can be hard on the feet and the TB in North America has become known to be rather flat-soled and often possesses under run heels.  The latter can often be improved.

Let’s exam three random TB’s and see which one might best be suited for a secondary career under saddle. 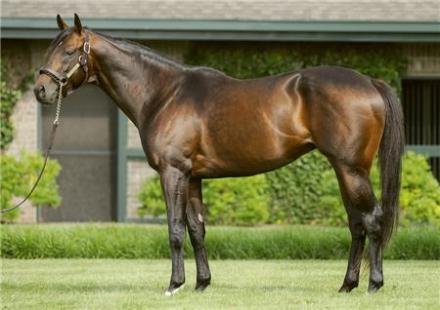 This individual is clearly downhill.  His neck set is about as low as we’d ever want to accept for a riding horse.  Certainly its musculature and posture could be significantly improved.  It’s roughly attached and some of that would also improve with correct work.  He’s quite straight through the hind leg with a higher hock and stifle set.  On the plus size he’s got really good bone, a low knee and decent hip.  The loin currently lacks depth, but that too would improve with good riding.

A little less downhill than our first horse, a better neck set with the neck attaching more smoothly, significantly more angulation through the hind limb, hock set higher than our first horse, but the stifle is set lower.  This horse’s knee, though, is set quite a bit higher and is tied in a bit.  Look how that high knee adds length to the cannon bone and shortens the forearm.  Not the combination you want on a riding horse.  The high knee interferes with jumping form and the short forearm interferes with lateral movement.  His hip length is just as good as our first horse, and he has a loin that is shorter, deeper and stronger, but this horse is lighter boned – the lightest substance you want to see on a racehorse.

Real close to being level built.  Great neck, great hip, super loin, medium back length, withers and ribcage carry back really well, super low set stifle (hock higher than ideal), phenomenal pants muscling – simply screams ‘Ride me!’- UNTIL – the legs are such a disappointment; too light of bone, a bit too straight through the knee, a bit tied in, and another high knee (not as high as horse #2, but higher than #1).  If this horse is really straight-legged with minimal offsets, deviations and rotations of bones, which we can’t see from this photo, and you don’t want to pound his legs with a lot of jumping or jumping at speed, then odds become more favorable that he can stay sound.  We can’t see his feet, but they’re likely on the small side, still, he’s the individual in this bunch that could most easily transition to a ridden discipline, followed by horse #2.  Horse #1 is still capable of being a decent mount, but will require a much more skilled rider/trainer for a riding discipline.  This horse will always naturally want to plow around on his forehand.

Now that we’ve looked at physical traits, it’s time to discuss temperament, personality and retraining the racehorse. Know that the horse that walks off the track is not the ‘real’ horse. It takes a number of months for a racehorse to ‘let down’. Many right off the track are high on concentrates, experiencing chronic pain, and haven’t seen a pasture in months (or years). They’re often underweight and certainly are carrying next to no body fat, often have been allowed to have their way with humans, or have been ‘roughed up’. All are stiff and one-sided with musculature honed for speed rather than carrying a rider effectively and efficiently.

Probably the hardest part of retraining is that racehorses are taught, allowed, and encouraged to grab the bit and lean on it/pull against it.  In their secondary careers they need to learn to accept contact and yield to the slightest changes in rein pressure, learning to rebalance, slow and stop by dropping their haunches rather than throwing their weight over their point of shoulder and onto their front legs.

The other significantly tricky aspect to retrain is their inherent nature to want to race against other horses in the ring.  A good way to start the retraining process is to put them in the Dressage ring by themselves.  When enough retraining has occurred and the horse understands acceptance of contact and the half halt, and is more physically able to shift weight rearward, then slowly introduce other horses into the training arena with cooperative friends and test the new skills in this controlled environment.  Hack alone and then, again, once retraining has progressed far enough, slowly introduce other horses on the hack in a controlled manner.

Realistically, if everything goes right and the horse is relatively sound to begin with, you’re looking at a year’s time to let down, remold musculature, and retrain to a very solid Dressage training level.  This is not a process you can rush if you want what’s best for the horse.