The trot is a two-beat, diagonal leg pair gait with a period of suspension. Its the most energy efficient gait for the horse to cover ground. The diagonal pair of feet should land at the same time and the horse’s legs should create two equal triangles between the front legs and the hind legs and a third triangle upside down under mid-body.   Impurity in the trot can be caused by poor conformation, soreness, injury, muscle tension, bad training techniques, tack that doesn’t fit, rider imbalances etc…

This is a pretty good extended trot for this horse, showing the three trotting triangles. (I love that the person longeing the horse has her back turned.) 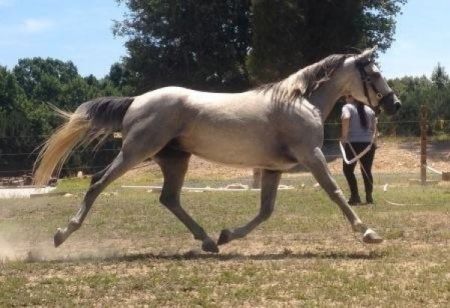 The stride length of the hind legs is identical to that of the front legs.  The hind foot is going to land a fraction before the front foot.  There is some tightness through the loin and shoulder; the loin should be full and round, the front leg straighter via the knee further back.  The tightness causes the near miss between the two feet.  If the horse engaged more (rather than swinging the legs a bit like a leg mover vs a back mover), the back would round,  the haunch would lower (it’s a bit in the air here), weight would be transferred rearward, and the front end would lift (and loosen).  All that would change the timing of the trot and give the horse more room for the deeper hind leg step that would result, without the close call. 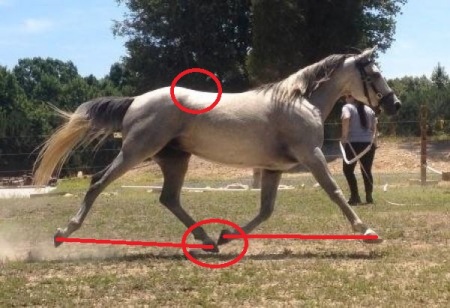 This is a very nice extended trot for a draft (or draft cross).   As discussed in the conformation series, typical first gear gearing (that one would expect this horse to have) creates a shorter stride behind, but this guy is working it.  Unfortunately the photo is taken at an angle so we can’t get a clear picture of the haunch.  The angle also distorts the measurements of the hind and front stride length.  It appears as if the horse has taken a way bigger stride behind than in front.   Some of this difference has to do with the tight extensors.  The left forearm is in front of the vertical and there’s more bend in the knee than with the first horse.  Less tightness would bring the knee back and straighten the leg creating a bigger front leg stride and triangle. 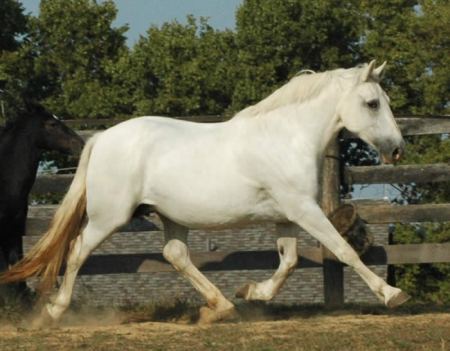 The draft horse has reached further forward with the right front than the first horse.  Compare where the foot is in relationship to the horses’ noses.  (Both horses have equally short necks, so this isn’t a case of the nose being further out on one horse.  Both horses also are exhibiting equal shoulder slopes, so it also isn’t a case of a difference in potential stride swing from the shoulder.  What differs are the shoulder angles, the draft is 105 degrees while the other grey is 98 degrees; undoubtedly the draft carries a more open resting shoulder angle.  This connects back to previous discussions about the importance of the humerus bone and shoulder angle and its affect on stride.

Other distortion in the photo makes it look like the draft has stepped up under his wither, while the first horse only stepped to mid back.  Note that some of this has to do with the draft horse being much shorter bodied.

There is a touch of impurity in the timing of the gait of the draft with the right hind toe still touching the ground while the front is long gone off the ground and the left hind foot about to land before the right front, but I’m just not going to fault this big horse for using his haunch this well.  Some stretching and suppling work of the front end would help even out the gait. 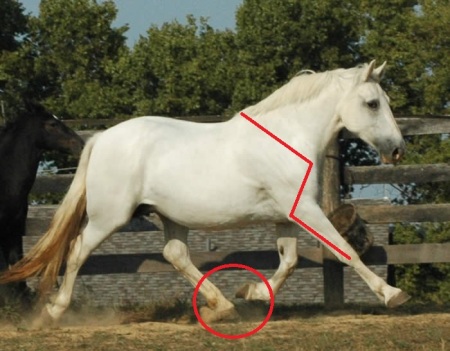 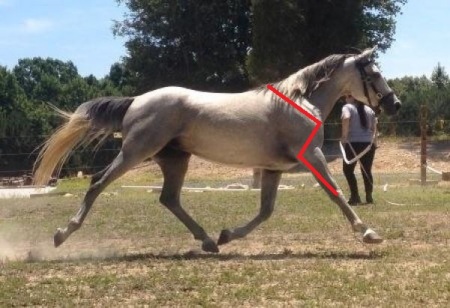 And now let’s look at what Dressage rewards as an extended trot. 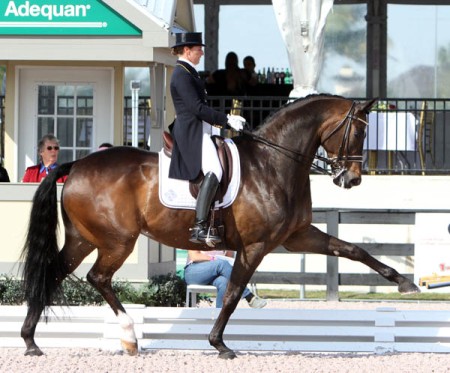 There is so much wrong here, that I’m not even sure where to start.

1) Clearly a much shorter step behind than in front.
2) The hock of the landed leg is pushing off from behind the horse’s point of buttocks rather than from under the horse’s hip.
3) Horse heavily on its forehand as indicated by the much deeper flexing of the fetlock on the right front than on the left hind.
4) Right hind leg is going to land barely in front of the point of hip, when it should be landing under the rider’s seat. 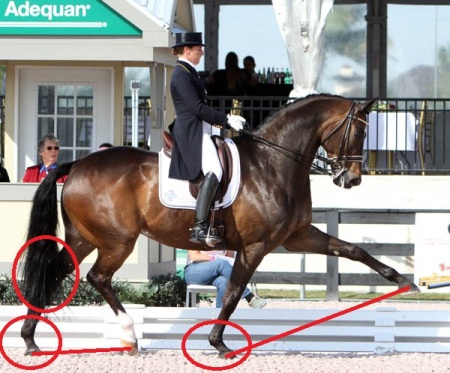 In this photo we have many of the same traits but with the added insult of a ‘toe flick’ via a hyper extended leg. 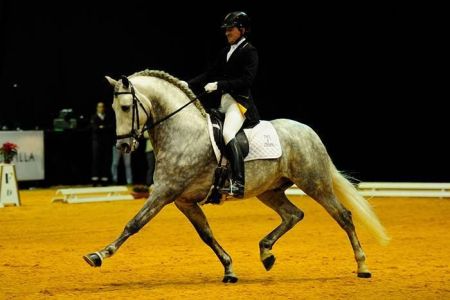 Under the circumstances, this horse is doing a decent job of a lower level working trot. 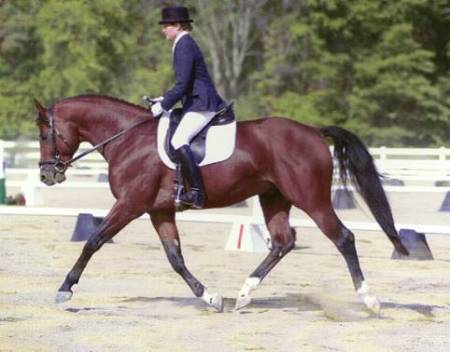 The horse is taking a smaller step behind than in front.  Why?  Notice the lovely tubular complexus muscle in his neck and that it extends right into his shoulder; he’s lifting his base of neck nicely here, lifting his wither.  He’s also lifted his back some, but there is tightness and angularity to his loin, which is also a bit shallow, and some angularity to the haunch muscling.  Looking at his hind leg conformation we see that he clearly has a femur shorter than his tibia.  What’s happened is two fold; the short femur naturally limits the length of stride and the horse has stressed his loin at some point, which further blocks the leg from swinging forward.  Release the loin and the horse could swing the hind leg more freely forward, creating more engagement, blah, blah, blah. 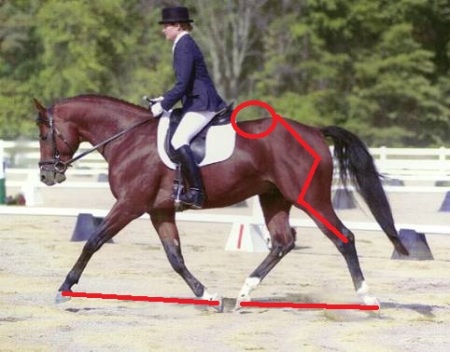 Here’s another working trot, with the horse taking a bigger step behind than in front. 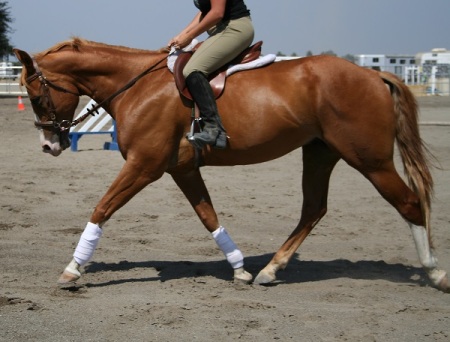 We have the same flat, tight loin and lack of fullness to the rump.  The bigger step behind on this horse is (partly) the result of being over angulated behind, not from being super engaged.  We have a shorter femur to tibia, but the femur is long.   This is a case where the horse often likely over strides (steps beyond the front footfalls), but isn’t actually engaged.  It’s why when someone says their horse ‘tracks up’ it doesn’t always mean the horse is moving well, or when people instruct that a horse should ‘track up’ and doesn’t, it’s not necessarily an indication the horse isn’t engaged.  It’s all relative and dependent on conformation AND use of the body in the moment.

Most disturbing in this photo is the atrocious neck usage and muscling.  This is a horse that has been trained and ridden ignorantly.  At the very least this horse has a low neck set, but I suspect she’s? ewe-necked.  She’s been ridden in some sort of restraining apparatus; martingale, probably draw reins, likely both.  While I believe the previous horse could use with a touch more release of the hand, it’s no contest which one we should be aiming for.  As a result of this heavy handed training and riding, this horse has been blocked from freely striding in front, locked onto its forehand (right front still on the ground while left hind off the ground, and right hind going to land before right front leaves the ground), and killed the suspension of the gait. 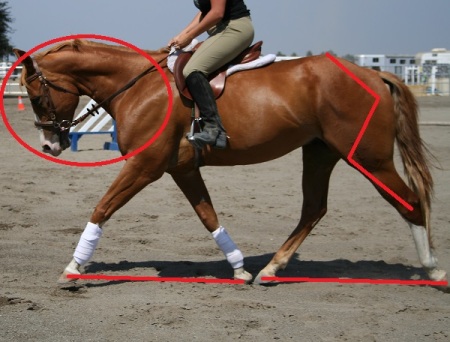 In this photo we have a horse whose trot has been severely manipulated by training and riding to meet a show class ‘look’.  And not in a good way. 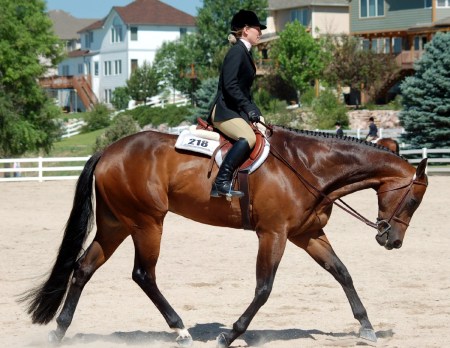 While it’s clear the front end is taking a bigger stride than the hind end, both ends have been severely shortened by bad training and riding, so much so that the horse doesn’t close the middle triangle of the trot (and would so naturally if allowed).  We finally have a horse that has a femur at least as long as its tibia, what we want in the riding horse to create the potential for a deeper step behind.   Problematic conformation for this horse is a natural downhill build (which has been encouraged and increased) and a low set neck.  Despite those, there’s no reason for this horse to be moving this poorly (planted on its forehand – which its trying real hard to get off of – and lacking suspension – which it naturally has in spades) except that his people are ignorant.  Note that the lowering of the head here is not the result of lifting the base of neck (again, the horse is trying real hard to do it right).  This is a ‘putting my head down to graze’ posture. 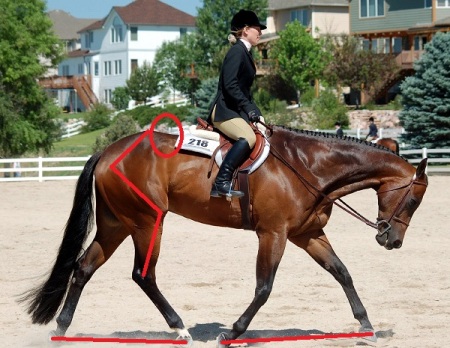 Not to exclude our Western readers… 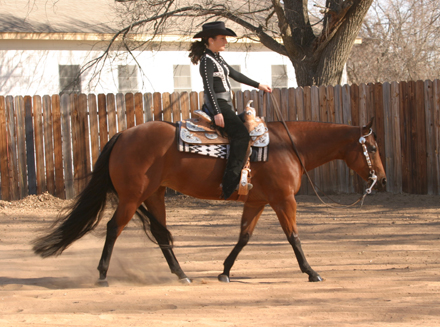 A bigger stride in front than back due to the horse being on its forehand (downhill build), but most of what’s going on in this photo is conformation related.  This horse is post-legged and has a closed shoulder angle giving it a short-stride back and front with little joint articulation, and no suspension.  I’m not disappointed in how it’s being ridden – probably the least offensive WP horse I’ve seen in a long time – but rather in the traits that have been perpetuated by breeders. 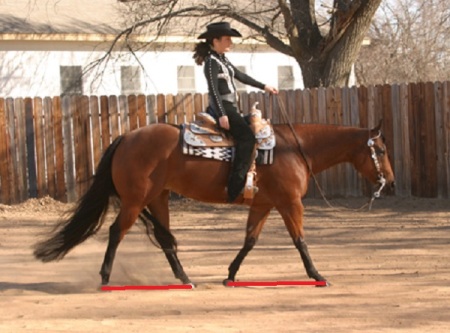 In this photo by Jennifer Buxton, we have a WP horse with more purity to its jog and almost a period of suspension.  Still a bit on its forehand, it’s not bad given the downhill build and post-leggedness.  This horse is using itself pretty well under the circumstances.  Note the muscle contraction line of the abdominals.  There’s a very faint outline of the tubular complexus muscle from lifting the base of neck.   It would develop and be more prominent if the horse was more willing to seek contact and wasn’t so tense in the jaw and poll.  I’m left with the impression that the horse was started half right and then rushed/forced (put your head HERE) to be finished for the show ring. 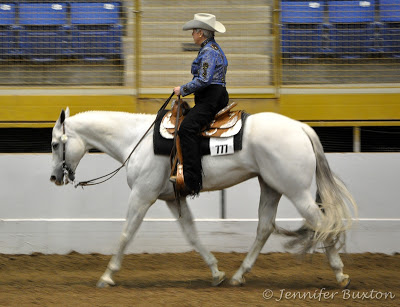 17 thoughts on “Trotting Up A Storm”