A second brave soul, WinterGlitter, has offered her equine companion for closer scrutiny so that all might learn.  Below is a detailed background of how she and Snow got to their current point.  I think there will be some amongst us who’ve had similar experiences.

Snow is a 12 year old, 14.2H Haflinger/ Paint gelding.  I picked him up from a local rescue that I was volunteering at in December of 2010.  The only information I have regarding his past is a little fuzzy.  Supposedly, Snow had been sent out for training to ride and drive when he was 2, whether he was ridden at all after that I have no idea.

When I first started working with him, Snow could only walk and trot under saddle (he was incredibly unbalanced at the canter – think freight train running faster and faster just so he didn’t fall down), had a very rough concept of steering, stopping, and backing, and had many basic manners/groundwork issues that needed to be corrected as well (i.e. herd bound, not lifting feet/leaning on farrier, standing tied – wouldn’t pull back, but wouldn’t stand still either – and generally behaved like a ‘lady’s man’).

All training and riding that he’s had since I’ve owned him has been done by me.  I’d like to continue that way, and would rather learn how to improve on my own with a professional’s guidance than have a trainer do it for me.

When I started working with Snow I did many, many hours of groundwork and ‘manners’ training: natural horsemanship, clicker training, traditional lunging, etc.  Snow has wonderful ground manners now, isn’t herd bound, and I wouldn’t be ashamed or afraid to let anyone else handle him.

I started out riding western, dinking around doing competitive trail, so that’s how I started riding Snow.  A little less than two years ago, I became interested in Dressage and Jumping, and started taking lessons with an Eventing Instructor.  I love it!  Both Dressage and Jumping are incredibly fun and I still dream about getting to an event one of these days, even if it’s just at Beginner Novice.

For about a year after I started lessons with this instructor things were going pretty well.  Even though I only averaged two lessons a month, I think we came along decently, working through some of Snow’s (and my) major roadblocks such as lack of rhythm, balance, suppleness, MY difficulty taking up contact (so used to throwing my reins away and riding on the buckle!), Snow’s stiffness and willingness to just brace against everything.

However, last summer I started to notice some things I was not happy about with my pony’s training. I noticed he had started ducking behind the bit and breaking back at the 3rd vertebrae, which had never been his problem.  I was angry, angry at myself because I had followed a trainer like an unquestioning sheep and had allowed her to teach me to ride in a way that I knew was not right.  Her focus on pushing me to use more rein to force his head into a position was definitely not right in my opinion!  The more I thought about it, the more I noticed things I had been taught to do that were not right for me, my horse, and the level we were at.  I should mention at this point that cantering was still an issue, I could get a canter when I asked, but could not get the correct lead either direction (more typically to the right – firmly believe this has been an ongoing lack of balance in both horse and rider), and that I was – surprise! – unhappy with my instructor’s solution of using exaggerated haunches-in when asking for the canter; constantly, every time.

So I quit.  I haven’t ridden with an instructor since then because I am being much more careful in my instructor search this time around.  I have continued to ride and work through the fall and winter when the horrible temperatures have been bearable, and sometimes when they haven’t been.  All the things my former instructor was advocating, I’ve ignored, and while my riding may not be truly benefitting Snow, I am confident that I am at least not harming him.  I started working more on long and low, relaxation, rhythm, suppleness, and making sure that my pony is balanced before I ask for the canter.  I can now pick up the lead I’m asking for (100% of the time as long as I’ve set Snow up to succeed) and I can even get a walk-canter transition with correct lead. 🙂

I’d like to know if Snow has athletic ability and suitability for Dressage and Jumping, and overall for Eventing.  I’m willing to work him up the levels as far as he will comfortably go, but more important to me is his sustainability.  Does Snow have any issues in his conformation that I’m going to be working against? Anything that could cause damage, pain, or lameness the more we ride and train?

Without further ado, I present Snow (props to WinterGlinter and her excellent ground tying training): 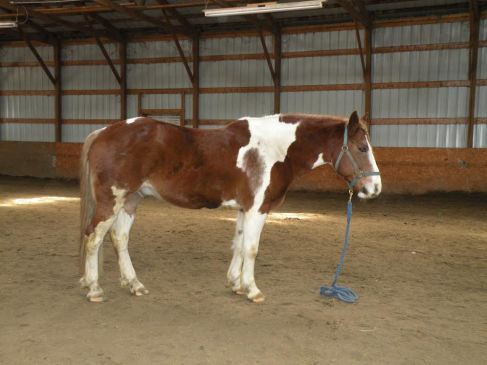 Neither the Haflinger nor the Paint is ideally suited to Eventing or the three disciplines of Dressage, Stadium Jumping and Cross Country Jumping that make up Eventing.  WinterGlinter doesn’t say how far up the Eventing ladder she wants go.   The lower levels can be tackled by a vast majority of sound, sensible equines without too much trouble.  Snow doesn’t have to possess any significant discipline specific traits, but rather just needs to be an all-around solidly ‘riding’ conformed individual with a good temperament to achieve those.  Let’s have a closer look.

Snow’s overall conditioning is lacking; sagging of the abdominals with a corresponding tightness over his back, and no clear definition of muscle groups confirms.  What’s below the belly line needs to be moved to fill in the topline – specifically a strengthening of the abdominals and the stretching and filling of the back and connecting soft tissue. 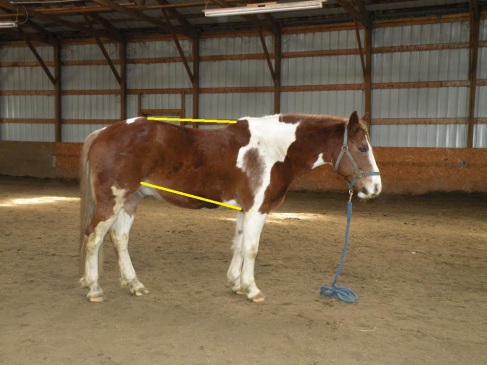 The peaked croup needs to become less obvious by the loin becoming less tight and angular, and the dip in front of the withers needs to fill by reducing the bulk of the lower neck.  This can all be done with just good, correct basic ground and under saddle work.  There’s no magic or miracle required.  Six months of a consistent (5-6 days per week), well-thought out program that includes some stretching and massage, high quality feed, and plenty of turnout would transform Snow. 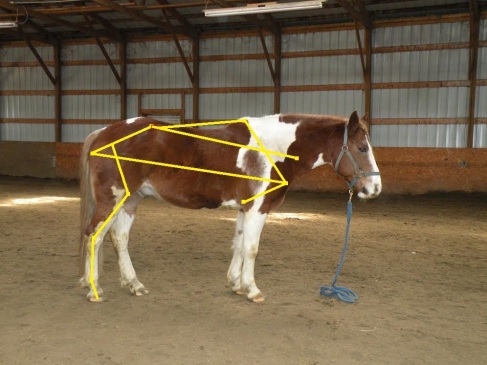 Like any horse, Snow isn’t perfect and possesses some traits that require working with/around.

I did not mention the closed shoulder angle because it’s artificial, created by Snow standing over his point of shoulder and with the foreleg too far under the body.  Here’s another shot with him standing more correctly, but still in that forward and down posture tendency.  The shoulder angle is still closed, but only slightly.  Once Snow has been reconditioned and encouraged to move correctly his posture will lift and he’ll possess an adequate shoulder angle of 90 degrees.

So how will these faults and weaknesses affect the final outcome?

As I’ve already suggested, twice, the final outcome should be viable; not entirely easy, but certainly achievable.   The downhill build makes getting off the forehand more difficult, but with such strong conformation behind there’s no reason why he can’t gain the strength to do it.  Hill work would be on my agenda for this horse and certainly doing cavelletti, gridwork and jumping on the ‘uphill’ would be included.  Downhill work – a requirement for cross country – would be saved for when Snow had already gained substantial strength, suppleness and adjustability on the flat.  Downhill work now merely encourages the poor posture.

Snow has a good bit of angulation to the hind leg, suited more to Dressage, but his femur is shorter than his tibia, which creates a shorter, quicker, thrustier stride suited to jumping or galloping.  Ideally for Eventing we’d want a femur and tibia of equal length with a little less overall angulation.  Still, it’s a solid hind leg that won’t interfere with lower level Eventing.

Even more than the downhill build, it is the construction and set of the neck, along with a bigger, heavier head (it’s a counter balance) that present the biggest challenge; hammer-headed and ewed.    I know that last may come as a surprise to some, since this is not typically how we envision ewe-necked horses.  The big difference for Snow is that his neck is far more deeply set and far shorter than most horses we see with ewe-necks.  He also possesses a good amount of fleshy cresting.

WinterGlitter was generous enough to send along a riding photo.  While this is clearly a photo taken ‘before’ WinterGlitter started her new quest with Snow, it illustrates why simply shortening the rein and raising a horse’s head (what her instructor had her doing) in no way equates to correctness.

The lower cervical curve is dropped and bulging, the throat closed.  If Snow had a medium or long upper cervical curve, instead of the short one (and the mane was on the other side), you’d easily see that he’s broken at C3.  The entire neck is compressed as the rider has taken up contact, rather than horse stretching and seeking contact.   In part the horse’s resistance to accept contact comes from a too straight arm.  Elbows should be falling relaxed and bent at the rider’s side (red dot).  Too much inside rein has resulted in a shortened inside leg stride.

WinterGlitter was right to question the direction her instructor was taking her in.  Perhaps when the relationship first started, she needed to become more focused and assertive in her riding.  A hired set of eyes that can identify that and push you forward isn’t a bad idea.  But ‘setting the head’ is a vicious cycle, particularly when you have non-ideal neck structure like Snow.  He wouldn’t naturally be carrying his head in that ‘Dressage position’ and by forcing him to carry it there through use of hand and rein means that to do it he’d have to invert his neck and make matters worse.

Snow absolutely must stretch that neck and seek contact before WinterGlinter takes up the slack.  Both horse and rider need to rely heavily on the great haunch.  Forget about what’s happening in front of the saddle and just ride the haunch.  Feel each hind leg as it leaves the ground, swings forward, and lands.  Control them with leg, seat and weight.  Ride the circle properly.  Embrace transitions within and between gaits.  Use terrain to your advantage.  Master shoulder-fore, then master shoulder-in.  There is no magic here; it’s just plain ole correct execution of the basics.

Displacement of the haunch to achieve a canter depart is wrong, all day long, every day.  Forward, rhythm, suppleness, acceptance of contact and straightness inevitably leads to a crisp, accurate depart.

Taking Snow beyond the lower levels would be a more difficult task.  I don’t believe it would have anything to do with him being unable to remain sound.  The ability to make the faster galloping times for cross country are just simply not in the wheelhouse of the bulkier equine.   His jumping form and scope will improve with correct riding, as the transfer of work to the haunch will change the front end musculature, but will it be enough for the larger obstacles?  Certainly the higher levels require a horse to be much handier, far more adjustable and braver.

Best wishes to WinterGlinter and Snow.  I hope to see some pictures of them together at an event in the near future.  If anyone else has some ideas and suggestions for them, I’m sure they’d be appreciative.